The first named inhabitant of Soulton (Beorhtric, brother of Edric Streon, the last Earl of the Kingdom of Mercia and son-in-law of King Ethelred the Unready) was murdered by King Cnut on Christmas Day, 1017.  Britric was described as "lubricus, fleeting, ambitious and proud'' by Roger of Hoveden, an 12th-century English chronicler.  King Cnut is of course the legendary early English king who attempted to order the tide not to come in. 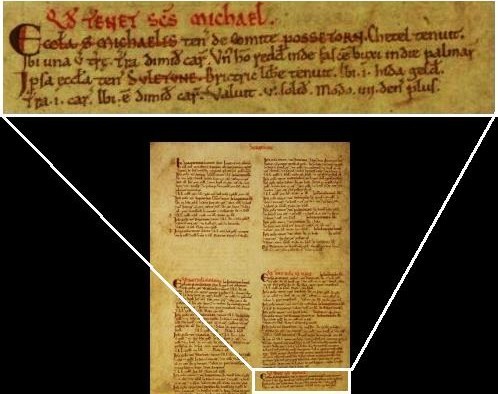 Directly after the Conquest, a Mote and Bailey castle was built here, and we still have its remains to this day.

The manor is listed in the Domesday Book of 1086, which records that William the Conqueror's councillor Roger, First Earl of Shrewsbury, included the profit of the manor of Soulton in the endowment of the Royal Chapel in Shrewsbury Castle.

'THE CASTLE CHURCH OF ST MICHEAL itself holds SVLETONE: The Saxon Beorhtric held it freely [pre-Conquest].  There is one hide paying gels [c.120 acres paying tax].  There is land for 1 plough.  There is half a plough.  It was worth 5s; now 4d more'.  Later the castle was to demand bundle of box wood every Easter, for use in the Palm Sunday service.

For a long time Soulton was literally the last manor in England before Wales.  A deed granting the manor in 1399 established our boundary as 'following the ancient [even then!] marker stones of England'.

Indeed, this was frontier country for centuries; in the time called by some the 'Dark Ages', Soulton sat on the frontiers of Powys and Mercia.  Whilst discussing this period, it's perhaps quickly worth saying that some historians place the real King Arthur in our neighbourhood as ''Owain Ddantgwyn - The Bear'', hence several legends of King Arthur and the Holy Grail in this area.