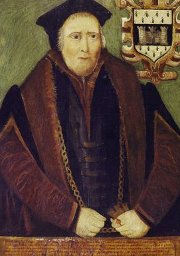 In 1556, Sir Rowland Hill (who had been the first protestant Lord Mayor of London in 1549 and was a creditor to Henry VIII) acquired Soulton from the Tywnihos. At one point he was briefly sent to the Tower of London, whilst MP for London, for asserting the privileges of Parliament against the King, and his memorial stone notes him as:

'A foe of vie and vehment corrector'.

He extended and re-modeled the Tudor long house at Soulton into the impressive Elizabethan brick building which can be seen today.

Sometime after Rowland Hill, it is thought, the near end of Soulton Court was built, either as a banqueting house or as a the moot hall for this manor. A moot hall being the place where the court baron and community gathering were held, in the days when the lordship of the manor (which still exists and is still held) invoked its jurisdictions and privileges (e.g. the regulation of baking and brewing, assisting those who farmed the land with their copy-hold ownership transfers, and dealing with minor civil matters).